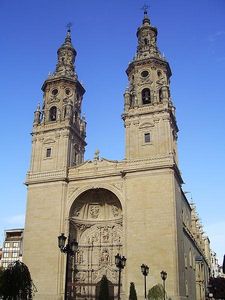 The Co-cathedral of Santa María de la Redonda is a co-cathedral located in Logroño, in La Rioja, Spain. It belongs to the Roman Catholic Diocese of Calahorra y La Calzada-Logroño.

It was declared Bien de Interés Cultural in 1931.
The church has two elaborately decorated towers, each containing a set of bells. The sidewall of the church has a clock split into three faces : one each for the hour, minute and second.
The entrance to the church is set in an alcove filled with Christian sculptures,protected by high iron gates and netting to prevent people or birds entering. The towers are similarly netted but the famous storks which inhabit Logrono can still nest on the highest ledges.