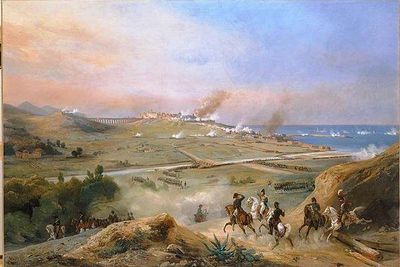 In the Siege of Tarragona from 5 May to 29 June 1811, Louis Gabriel Suchet's French Army of Aragon laid siege to a Spanish garrison led by Lieutenant General Juan Senen de Contreras. A British naval squadron commanded by Admiral Edward Codrington harassed the French besiegers with cannon fire and transported large numbers of reinforcements into the city by sea. Nevertheless, Suchet's troops stormed into the defenses and killed or captured almost all the defenders. The action took place at the port of Tarragona, Catalonia, on the east coast of Spain during the Peninsular War, part of the Napoleonic Wars.

Emperor Napoleon offered Suchet a marshal's baton if he could capture Tarragona, so the French general pursued his goal vigorously. He methodically overran the city's outer works as he drove his siege parallels forward. The French general easily fended off weak attempts to relieve the city by land. Near the end of the siege, the French troops captured the lower city in a surprise attack and the garrison's survivors retreated to the upper city. At the end, Suchet's men stormed into the upper city amid scenes of horrific slaughter, including the murder of civilians. The loss of this major base and so many Spanish troops crippled the Army of Catalonia. Napoleon duly awarded Suchet the coveted rank of marshal.