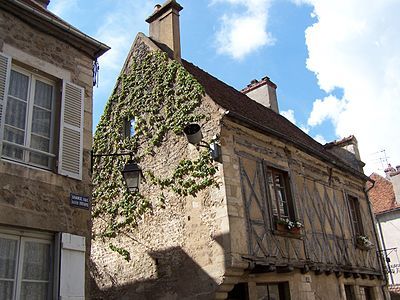 Avallon is located 50 km south-southeast of Auxerre, served by a branch of the Paris-Lyon railway and by exit 22 of the A6 motorway. The old town, with many winding cobblestone streets flanked by traditional stone and woodwork buildings, is situated on a flat promontory, the base of which is washed on the south by the Cousin, on the east and west by small streams.
Chance finds of coins and pottery fragments and a fine head of Minerva are reminders of the Roman settlement carrying the Celtic name Aballo, a mutatio or post where fresh horses could be obtained. Two pink marble columns in the church of St-Martin du Bourg have been reused from an unknown temple . The Roman citadel, on a rocky spur overlooking the Cousin valley, has been Christianized as Montmarte .