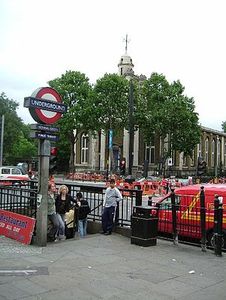 Bethnal Green is a London Underground station in Bethnal Green, east London. The station is situated in the East End of London and is served by the Central line lying between Liverpool Street and Mile End stations. The station was opened as part of the long planned Central line eastern extension on 4 December 1946; before that it was used as an air-raid shelter. On 3 March 1943, 173 people were killed in a crush while attempting to enter the shelter.
The station is an example of the "New Works Programme 1935 – 1940" style adopted by London Transport for its new tube stations. Extensive use is made of pale yellow tiling, originally manufactured by Poole Pottery. This has been replicated during the 2007 modernisation although several panels of original tiling were retained on the platforms. The finishes include relief tiles, showing symbols of London and the area served by the London Passenger Transport Board, designed by Harold Stabler. The station entrances, all in the form of subway access staircases to the subterranean ticket hall, all show the design influences of Charles Holden, the consulting architect for London Transport at this time.