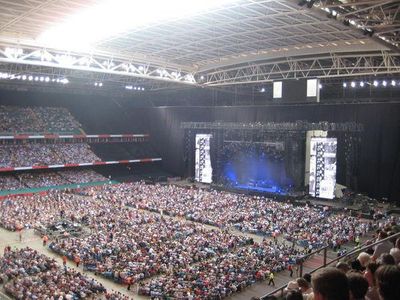 The Millennium Stadium , known since 2016 as the Principality Stadium for sponsorship reasons, is the national stadium of Wales. Located in Cardiff, it is the home of the Wales national rugby union team and has also held Wales national football team games. Initially built to host the 1999 Rugby World Cup, it has gone on to host many other large-scale events, such as the Tsunami Relief Cardiff concert, the Super Special Stage of Wales Rally Great Britain, the Speedway Grand Prix of Great Britain and various concerts. It also hosted six FA Cup finals and several other high-profile football fixtures while Wembley Stadium was being redeveloped.

The stadium is owned by Millennium Stadium plc, a subsidiary company of the Welsh Rugby Union . The architects were Bligh Lobb Sports Architecture. The structural engineers were WS Atkins and the building contractor was Laing. The total construction cost of the stadium was £121 million, of which the Millennium Commission funded £46 million.