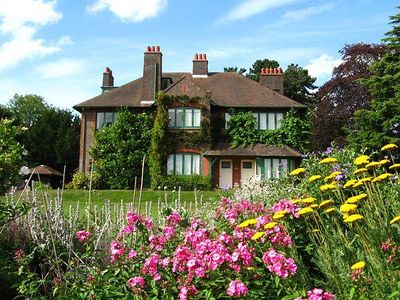 Shaw's Corner was the primary residence of the renowned Irish playwright George Bernard Shaw; now a National Trust property open to the public as a writer's house museum. Inside the house, the rooms remain much as Shaw left them, and the garden and Shaw's writing hut can also be visited. The house is an Edwardian Arts and Crafts-influenced structure situated in the small village of Ayot St Lawrence, in Hertfordshire, England. It is 6 miles from Welwyn Garden City and 5 miles from Harpenden.
Built as the new rectory for the village during 1902, the house was the home of playwright George Bernard Shaw from 1906 until his death in 1950. It was designed by local architects and local materials were used in its construction. The Church of England decided that the house was too large for the size of the parish, and let it instead. Shaw and his wife Charlotte Payne-Townshend relocated in 1906, and eventually bought the house and its land in 1920, paying £6,220. At the same time the garden was extended and Shaw bought land from his friend Apsley Cherry-Garrard, bringing the total to 1.4 hectares .