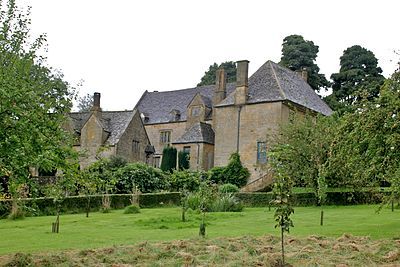 Snowshill Manor is a National Trust property located in the village of Snowshill, Gloucestershire, United Kingdom. It is a sixteenth century country house, best known for its twentieth century owner, Charles Paget Wade, an eccentric man who amassed an enormous collection of objects that interested him. He gave the property to the National Trust in 1951, and his collection is still housed there.
The property is located in Snowshill. It is a typical Cotswold manor house, made from local stone; the main part of the house dates from the 16th century. It is a Grade II* listed building, having been so designated since 4 July 1960. Also listed are the brewhouse, the dovecote, some of the garden buildings, the wall and gate-piers, and the group of four Manor Cottages.