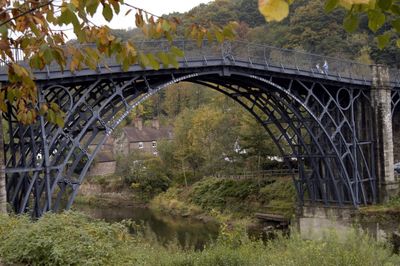 The Ironbridge Gorge is formed by the river Severn. Originally called the Severn Gorge, the gorge now takes its name from its famous Iron Bridge, the first iron bridge of its kind in the world, and a monument to the industry that began there. The bridge was built in 1779 to link the industrial town of Broseley with the smaller mining town of Madeley and the growing industrial centre of Coalbrookdale. There are two reasons the site was so useful to the early industrialists. The raw materials, coal, iron ore, limestone and clay, for the manufacture of iron, tiles and porcelain are exposed or easily mined in the gorge. The deep and wide river allowed easy transport of products to the sea.