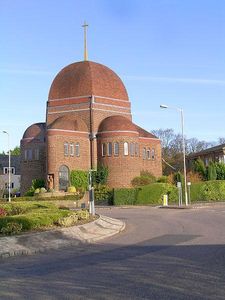 Princes Risborough () is a market town in Buckinghamshire, England, about 9 miles south of Aylesbury and 8 miles north west of High Wycombe. Bledlow lies to the west and Monks Risborough to the east. It lies at the foot of the Chiltern Hills, at the north end of a gap or pass through the Chilterns, the south end of which is at West Wycombe. The A4010 road follows this route from West Wycombe through the town and then on to Aylesbury.

Historically it was both a manor and an ecclesiastical parish, of the same extent as the manor, which comprised the present ecclesiastical parish of Princes Risborough and also the present ecclesiastical parish of Lacey Green, which became a separate parish in the 19th century. It was long and narrow , taking in land below the Chiltern scarp, the slope of the scarp itself and also land above the scarp extending into the Chiltern hills. The manor and the parish extended from Longwick in the north through Alscot, the town of Princes Risborough, Loosley Row and Lacey Green to Speen and Walters Ash in the south.