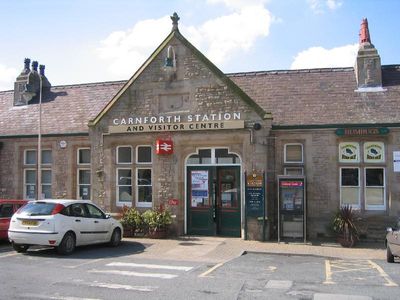 Much of the history of Carnforth revolves around the railway and ironworks. Vast deposits of limestone located locally made Carnforth an ideal place for an ironworks, as limestone is a key component of the smelting process. In 1846 the Carnforth Ironworks Company established a works, located near the railway station. In the same year a recession occurred in the Earl of Dudley ironworks in Worcestershire, this meant there was a surplus of workers. A number of workers moved to the ironworks and lived in the nearby company village of Dudley (now called Millhead). Iron production continued at the works until 1929 when it eventually closed down. The site was taken over by the War Department (UK) as an ordnance depot and remained as such until the 1960s. From then to the present the site is now an industrial estate consisting of several businesses.