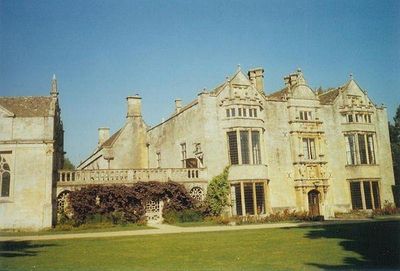 Burford is a small medieval town on the River Windrush, in the Cotswold hills, in the West Oxfordshire district of Oxfordshire, England. It is often referred to as the 'gateway' to the Cotswolds. Burford is located 18 miles west of Oxford and 22 miles southeast of Cheltenham, about 2 miles from the Gloucestershire boundary. The toponym derives from the Old English words burh meaning fortified town or hilltown and ford, the crossing of a river. The 2011 Census recorded the population of Burford parish as 1,410 and Burford Ward as 1,847.
Burford Priory is a country house that stands on the site of a 13th-century Augustinian priory hospital. In the 1580s an Elizabethan house was built incorporating remnants of the building. It was remodelled in Jacobean style, probably after 1637, by which time the estate had been bought by William Lenthall, Speaker of the House of Commons in the Long Parliament. After 1912 the house and later the chapel were restored for the philanthropist Emslie John Horniman, MP, by the architect Walter Godfrey.