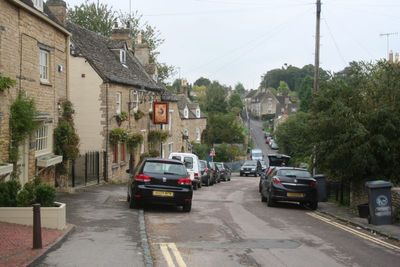 Charlbury () is a small town and civil parish in the Evenlode valley, about 6 miles north of Witney in West Oxfordshire. It is on the edge of Wychwood Forest and the Cotswolds. The 2011 Census recorded the parish's population as 2,830.
Toponymic evidence suggests that Charlbury was an Anglo-Saxon settlement from an early date, and may be associated with 'Faerpinga in Middelenglum' listed in the Tribal Hidage of the 7th to 9th centuries. The name is a compound of two Old English elements. Burh is a fortified place. Ceorl is a "freeman of the lowest class", but other sources suggest it was also a personal name. For this reason some hold the latter two pronunciations more valid than the former, and the current spelling not phonetic, preferring "Chorlbury". The similarity between "Ceorl" and the personal name "Charles" is no accident: "Charles", "ceorl" and "churl", along with the modern German name "Karl" derive from the same Proto-Germanic word *karlaz.