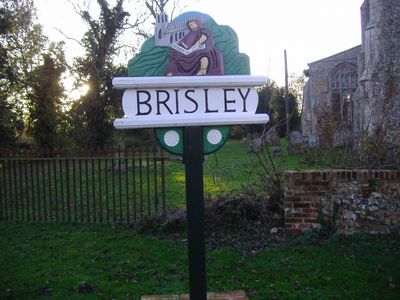 Brisley is a village in the English county of Norfolk located about halfway between Fakenham and East Dereham. It covers an area of 4.90 km2 (1.89 sq mi) and had a population of 276 in 117 households at the 2001 census The Village is located along the B1145 a route which runs between King's Lynn and Mundesley. English: habitational name from a place in Norfolk named in Old English with briosa ‘gadfly’ (Horsefly) + leah ‘woodland clearing’. Brisley although not recorded in the Domesday Book, had risen to become the 8th most affluent, out of 31 parishes in the Launditch hundred, by the time of the 1334 Lay Subsidy.