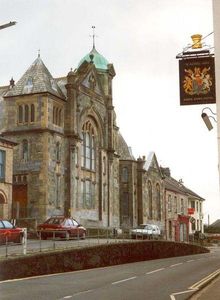 Lostwithiel is a civil parish and small town in Cornwall, England, United Kingdom at the head of the estuary of the River Fowey. According to the 2001 census it had a population of 2,739, increasing to 2,899 at the 2011 census. The Lostwithiel electoral ward had a population of 4,639 at the 2011 census. The name Lostwithiel comes from the Cornish "lostwydhyel" which means "tail of a wooded area".
The origin of the name Lostwithiel is a subject much debated. In the 16th century it was thought that the name came from the Roman name Uzella, translated as Les Uchel in Cornish. In the 17th century popular opinion was that the name came from a translation of Lost and Withiel , the lion in question being the lord who lived in the castle.