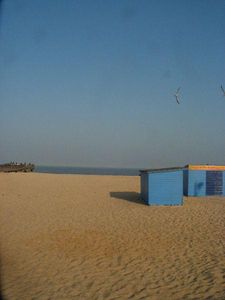 Great Yarmouth, often called Yarmouth, is a seaside town in Norfolk, England, straddling the mouth of the River Yare, some 20 miles east of Norwich. A population of 38,693 in the 2011 Census made it Norfolk's third most populous place. Its fishing industry, mainly for herring, fell steeply after the mid-20th century and has all but vanished. North Sea oil from the 1960s brought an oil-rig supply industry that now services offshore natural gas rigs. More recently, offshore wind power and other renewable energy have created further support services. Yarmouth has been a seaside resort since 1760 and a gateway from the Norfolk Broads to the North Sea. As a tourist centre, it was boosted when a railway opened in 1844, which gave visitors easier, cheaper access and triggered an influx of settlers. Wellington Pier opened in 1854 and Britannia Pier in 1858. Through the 20th century, Yarmouth was a booming resort, with a promenade, pubs, trams, fish-and-chip shops and theatres, as well as the Pleasure Beach, the Sea Life Centre, the Hippodrome Circus and the Time and Tide Museum, and a surviving Victorian seaside Winter Garden in cast iron and glass.

The town itself is on a 3.1-mile spit of land between the North Sea and River Yare. It features historic rows of houses in narrow streets and a main tourist sector on the seafront. It is linked to Gorleston, Cobholm and Southtown by Haven Bridge and to the A47 and A149 by Breydon Bridge. The urban area covers 8.3 sq mi and according to the Office for National Statistics in 2002 had a population of 47,288. It is the main town in the Borough of Great Yarmouth.