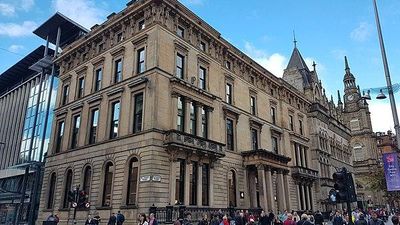 Buchanan Street is one of the main shopping thoroughfares in Glasgow, the largest city in Scotland. It forms the central stretch of Glasgow's famous shopping district with a generally more upmarket range of shops than the neighbouring streets: Argyle Street, and Sauchiehall Street.

Buchanan Street was first feued in 1777 and named after a wealthy Tobacco Lord and former Lord Provost of Glasgow, Andrew Buchanan of Buchanan, Hastie, & Co. He was proprietor of the ground on which it was formed from Argyle Street as far north as Gordon Street. Andrew had died in 1759 and his tobacco empire was inherited by his son James Buchanan of Drumpellier . The family made huge losses following the American Revolution of 1776, losing all their plantations in Virginia. The family members moved into textile manufacturing and industrial expansion. Sale of the land was probably at least in part to offset these initial losses. Palladian villas, similar to those of the 18th century in Argyle Street, Miller Street and Queen Street were erected along with other terraced townhouses from the 1790s onwards, similar to the new George Square and new Royal Exchange Square . Shops, hotels, banks, offices and clubs soon followed including the Western Club and the Athenaeum, later known as the Royal Scottish Academy of Music & Drama, linking through from St George's Place. Westward of Buchanan Street the development of Blythswood Hill and Blythswood Square followed apace.