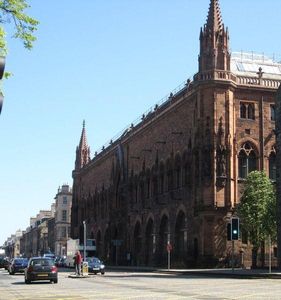 Since 1889 it has been housed in its red sandstone Gothic revival building, designed by Robert Rowand Anderson and built between 1885 and 1890 to accommodate the gallery and the museum collection of the Society of Antiquaries of Scotland. The building was donated by John Ritchie Findlay, owner of The Scotsman newspaper. In 1985 the National Museum of Antiquities of Scotland was amalgamated with the Royal Scottish Museum, and later moved to Chambers Street as part of the National Museum of Scotland. The Portrait Gallery expanded to take over the whole building, and reopened on 1 December 2011 after being closed since April 2009 for the first comprehensive refurbishment in its history, carried out by Page\Park Architects.