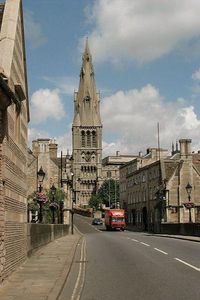 Stamford is a town on the River Welland in Lincolnshire, England, 92 miles north of London on the A1. The population at the 2011 census was 19,701. It was estimated to be 20,645 in 2019. The town has 17th and 18th-century stone buildings, older timber-framed buildings and five medieval parish churches. Stamford is a frequent film location. In 2013 it was rated the best place to live in a survey by The Sunday Times.
The Romans built Ermine Street across what is now Burghley Park and forded the River Welland to the west of Stamford, eventually reaching Lincoln. They also built a town to the north, at Great Casterton on the River Gwash. In AD 61 Boudica followed the Roman legion Legio IX Hispana across the river. The Anglo-Saxons later chose Stamford as their main town, being on a more important river than the Gwash.