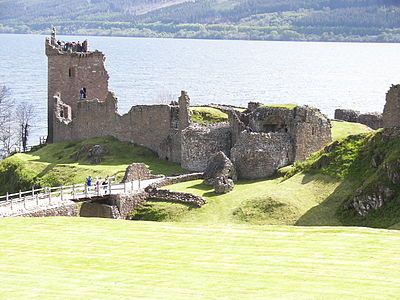 Urquhart Castle sits beside Loch Ness in the Highlands of Scotland. The castle is on the A82 road, 21 kilometres south-west of Inverness and 2 kilometres east of the village of Drumnadrochit.
The present ruins date from the 13th to the 16th centuries, though built on the site of an early medieval fortification. Founded in the 13th century, Urquhart played a role in the Wars of Scottish Independence in the 14th century. It was subsequently held as a royal castle, and was raided on several occasions by the MacDonald Earls of Ross. The castle was granted to the Clan Grant in 1509, though conflict with the MacDonalds continued. Despite a series of further raids the castle was strengthened, only to be largely abandoned by the middle of the 17th century. Urquhart was partially destroyed in 1692 to prevent its use by Jacobite forces, and subsequently decayed. In the 20th century it was placed in state care as a scheduled monument and opened to the public: it is now one of the most-visited castles in Scotland.