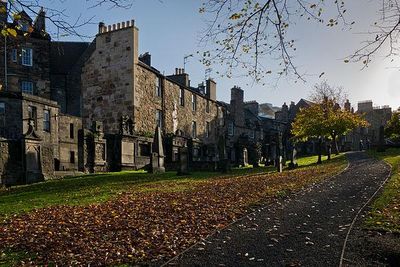 Greyfriars Kirkyard is the graveyard surrounding Greyfriars Kirk in Edinburgh, Scotland. It is located at the southern edge of the Old Town, adjacent to George Heriot's School. Burials have been taking place since the late 16th century, and a number of notable Edinburgh residents are interred at Greyfriars. The Kirkyard is operated by City of Edinburgh Council in liaison with a charitable trust, which is linked to but separate from the church. The Kirkyard and its monuments are protected as a category A listed building.
Greyfriars takes its name from the Franciscan friary on the site , which was dissolved in 1560. The churchyard was founded in August 1562 after Royal sanction was granted to replace the churchyard at St Giles.