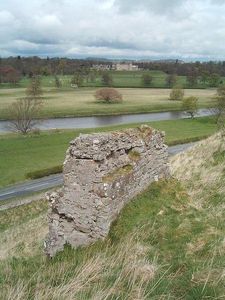 Roxburgh Castle is a ruined royal castle that overlooks the junction of the rivers Tweed and Teviot, in the Borders region of Scotland. Its castleton developed into the royal burgh of Roxburgh, which the Scots destroyed along with the castle after capturing it in 1460. Today the ruins stand in the grounds of Floors Castle, the seat of the Duke of Roxburghe, across the river from Kelso.

Tradition states that King David I founded the castle; it is first recorded in c.1128 during his reign. In 1174 it was surrendered to England after the capture of William I at Alnwick, and was often in English hands thereafter. The Scots made many attempts to regain the fortress. King Edward I of England imprisoned Mary Bruce in a cage hung outside the castle from 1306 to 1310. On 19 February 1314 it was retaken by Sir James Douglas , who supposedly disguised his men as cows, but was later lost again. While the Scots had control of the castle, they set about demolishing it, and in the words of the Lanercost Chronicle "all that beautiful castle the Scots pulled down to the ground, like the other castles that they had succeeded in capturing, lest the English should ever again rule the land by holding the castles."