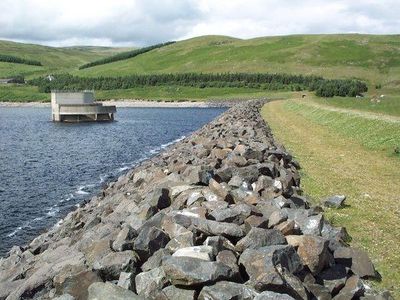 Megget Reservoir is an impounding reservoir in the Megget valley in Ettrick Forest, in the Scottish Borders. The 259 hectares reservoir is held back by the largest earth dam in Scotland. The reservoir collects water from the Tweedsmuir Hills, which is then conveyed 28 miles via underground pipelines and tunnels to Edinburgh. The pipelines are routed through the Manor Valley and the Meldon Hills, to Gladhouse Reservoir and Glencorse Reservoir in the Pentland Hills. These two reservoirs store the water until such times as it is required. Excess water which overflows from the reservoir is returned to the Megget Water, and hence into St. Mary's Loch.

The Megget Reservoir Scheme was first seriously considered in 1963. In 1974, the then water authority Lothian Regional Council applied for and received authority from the Secretary of State to proceed. Design was carried out by chartered civil engineers Robert H Cuthbertson & Partners on behalf of the water authority, and construction started in 1976. The dam which holds the reservoir is concrete with an asphalt impermeable core. The reservoir was officially opened on 30 September 1983. It has a capacity of 61,400,000 cubic metres , and a maximum water level of 334 metres above Ordnance Datum. The embankment is 56 metres high and its crest is 568 metres long.