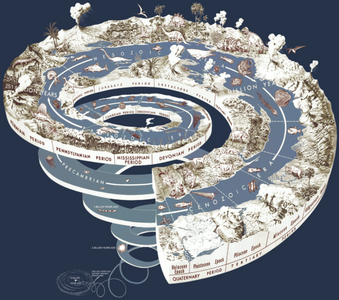 In the geologic timescale, the Rhuddanian is the first age of the Silurian period and of the Llandovery epoch. The Silurian is in the Paleozoic era of the Phanerozoic eon. The Rhuddanian age began 443.8 ± 1.5 Ma and ended 440.8 ± 1.2 Ma . It succeeds the Himantian Age and precedes the Aeronian age.
The GSSP for the Silurian is located in a section at Dob's Linn, Scotland, in an artificial excavation created just north of the Linn Branch Stream. Two lithological units occur near the boundary. The lower is the Hartfell Shale thick), consisting chiefly of pale gray mudstone with subordinate black shales and several interbedded meta-bentonites. Above this is the 43 metres thick Birkhill Shale, which consist predominantly of black graptolitic shale with subordinate gray mudstones and meta-bentonites.