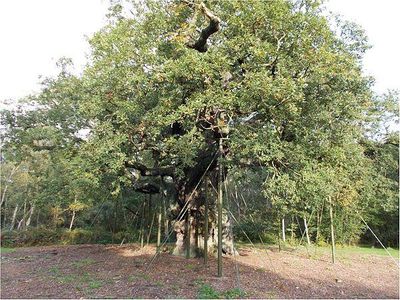 The Major Oak is a large English oak near the village of Edwinstowe in the midst of Sherwood Forest, Nottinghamshire, England. According to local folklore, it was Robin Hood's shelter where he and his merry men slept. It weighs an estimated 23 tons, has a girth of 33 feet , a canopy of 92 feet , and is about 800–1000 years old. In a 2002 survey, it was voted "Britain's favourite tree". In 2014, it was voted 'England's Tree of the Year' by a public poll by the Woodland Trust, receiving 18% of the votes. Its name originates from Major Hayman Rooke's description of it in 1790.
There are several theories as to how it became so huge and oddly shaped. The Major Oak may be several trees that fused together as saplings, or the tree could have been pollarded. However, there is only limited evidence for this theory as none of the other trees in the surrounding area were pollarded.