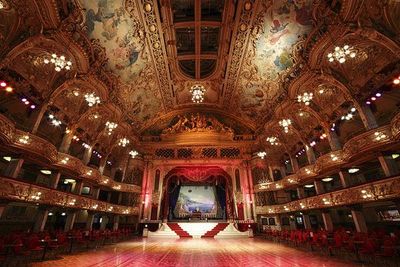 Blackpool Tower is a tourist attraction in Blackpool, Lancashire, England, which was opened to the public on 14 May 1894. When completed Blackpool Tower was the tallest man made structure in the British Empire. Inspired by the Eiffel Tower in Paris, it is 518 feet tall and is the 120th-tallest freestanding tower in the world. Blackpool Tower is also the common name for the Tower Buildings, an entertainment complex in a red-brick three-storey block that comprises the tower, Tower Circus, the Tower Ballroom, and roof gardens, which was designated a Grade I listed building in 1973. The tower celebrated its 126th anniversary in May 2020.
The Blackpool Tower Company was founded by London-based Standard Contract & Debenture Corporation in 1890; it bought an aquarium on Central Promenade with the intention of building a replica Eiffel Tower on the site. John Bickerstaffe, a former mayor of Blackpool, was asked to become chairman of the new company, and its shares went on sale in July 1891. The Standard Corporation kept 30,000 £1 shares and offered £150,000 worth of shares to the public; initially only two-thirds were taken up, forcing the company to ask for more cash contributions from its existing shareholders, but the poor financial situation of the company, exacerbated by the falling share price, rendered it unable to pay. Bickerstaffe, to avoid the potential collapse of the venture, bought any available shares until his original holding of £500 amounted to £20,000. He also released the Standard Corporation from its share commitments. When the Tower opened in 1894, its success justified the investment of nearly £300,000, and the company made a £30,000 profit in 1896.