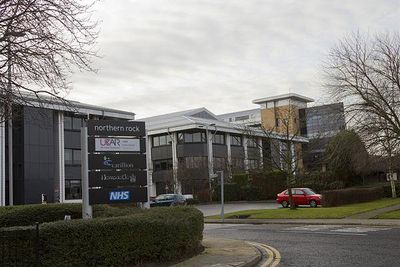 Northern Rock, formerly the Northern Rock Building Society, was a British bank. Based at Regent Centre in Newcastle upon Tyne, United Kingdom, Northern Rock was originally a building society. It demutualised and became Northern Rock bank in 1997, when it floated on the London Stock Exchange with the ticker symbol NRK. During the early 2000s the company borrowed substantially to fund mortgages, with the aim of ambitious growth, and also donated large amounts to charitable purposes and communities directly and through sponsorships. The global banking crisis beginning around 2007–08 meant that it was unable to produce income as expected from its loans, and was at risk of being unable to repay the amounts it had borrowed. The news that the bank had approached the government for support with its liquidity led within 24 hours to a public lack of confidence and concerns that savings were at risk, and the bank failed following a bank run as people rushed to withdraw their savings. It was the first British bank in 150 years to fail due to a bank run.
Unable to find a commercial buyer or secure the further government support needed, it was taken into public ownership in 2008, as an alternative to insolvency. By that point the government had extended liquidity support of tens of billions of pounds to Northern Rock. An inquiry concluded that the board had failed to properly protect the bank from the risks inherent in its strategy, or to restrain the executive directors where required, therefore although the bank had sufficient assets, it had become vulnerable.