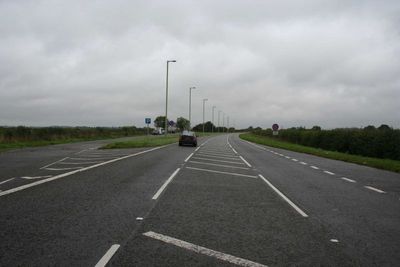 The A4260 is a road that leads from the A422 Henneff Way, Banbury to Frieze Way near Oxford. It is single carriageway for a majority of the route, except for a section near Steeple Aston for 0.9 miles (1.4 km) and on Frieze Way where the A4260 meets the A34 at Peartree Interchange, Oxford, where it becomes a dual carriageway. The road passes through Bodicote, Adderbury, Deddington and Kidlington, Oxfordshire. The road terminates at the A44 road roundabout at Frieze Way which is just north of Oxford. Until 1990 it was part of the A423 and the major route from Banbury to Oxford. It was renumbered to encourage the traffic that formerly used this route to use the M40.