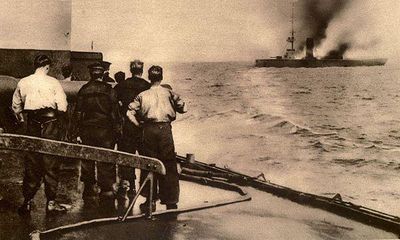 The First Battle of Heligoland Bight was the first naval battle of the First World War, fought on 28 August 1914, between ships of the United Kingdom and Germany. The battle took place in the south-eastern North Sea, when the British attacked German patrols off the north-west German coast. The German High Seas Fleet was in harbour on the north German coast while the British Grand Fleet was out in the northern North Sea. Both sides engaged in long-distance sorties with cruisers and battlecruisers, with close reconnaissance of the area of sea near the German coast—the Heligoland Bight—by destroyer.