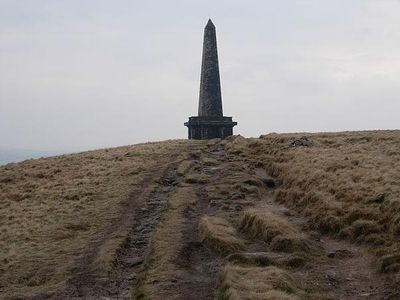 Stoodley Pike is a 1,300-foot hill in the south Pennines in West Yorkshire in northern England. It is noted for the 121-foot Stoodley Pike Monument at its summit, which dominates the moors of the upper Calder Valley and the market town of Todmorden. The monument is near the villages of Mankinholes and Lumbutts, West Yorkshire, and was designed in 1854 by local architect James Green, and completed in 1856 at the end of the Crimean War.

The monument replaced an earlier structure, started in 1814 and commemorating the defeat of Napoleon and the surrender of Paris. It was completed in 1815, after the Battle of Waterloo , but collapsed in 1854 after an earlier lightning strike, and decades of weathering. Its replacement was therefore built slightly further from the edge of the hill. During repair work in 1889 a lightning conductor was added, and although the tower has since been struck by lightning on numerous occasions, no notable structural damage is evident. There is evidence to suggest that some sort of structure existed on the site even before the earlier structure was built. The monument is approximately 2 miles south west of Hebden Bridge and approximately 2.5 miles east of Todmorden town centre. The monument was Grade II listed in 1984.