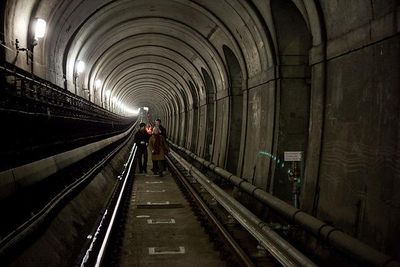 The Thames Tunnel is a tunnel beneath the River Thames in London, connecting Rotherhithe and Wapping. It measures 35 feet wide by 20 feet high and is 1,300 feet long, running at a depth of 75 feet below the river surface measured at high tide. It is the first tunnel known to have been constructed successfully underneath a navigable river and was built between 1825 and 1843 using Marc Isambard Brunel's and Thomas Cochrane's newly invented tunnelling shield, by Brunel and his son Isambard Kingdom Brunel.

The tunnel was designed for horse-drawn carriages but instead was used by pedestrians, and became a tourist attraction. In 1869 it was converted into a railway tunnel for use by the East London line which, since 2010, is part of the London Overground railway network under the ownership of Transport for London.