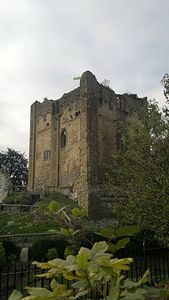 Guildford Castle is in Guildford, Surrey, England. It is thought to have been built shortly after the 1066 invasion of England by William the Conqueror.
After the Battle of Hastings in 1066 William led his army to Canterbury and then sacked towns along the Pilgrims' Way, including Guildford. Later William, or one of his barons, built Guildford Castle. There is no record of it in the Domesday Book so construction probably started after 1086.