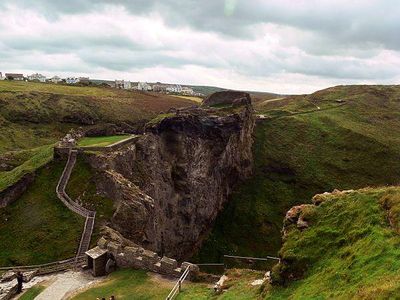 Tintagel Castle is a medieval fortification located on the peninsula of Tintagel Island adjacent to the village of Tintagel, North Cornwall in the United Kingdom. The site was possibly occupied in the Romano-British period, as an array of artefacts dating to this period have been found on the peninsula, but as yet no Roman era structure has been proven to have existed there. It was settled during the early medieval period, when it was probably one of the seasonal residences of the regional king of Dumnonia. A castle was built on the site by Richard, 1st Earl of Cornwall in the 13th century, during the later medieval period. It later fell into disrepair and ruin.

Archaeological investigation into the site began in the 19th century as it became a tourist attraction, with visitors coming to see the ruins of Richard's castle. In the 1930s, excavations revealed significant traces of a much earlier high status settlement, which had trading links with the Mediterranean during the Late Roman period.