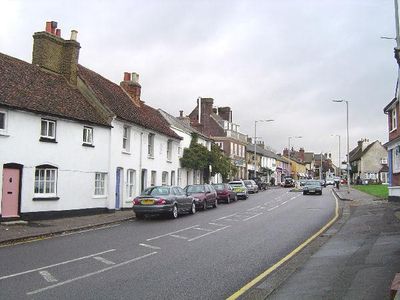 Bushey is a town in the Hertsmere borough of Hertfordshire in the East of England. It has a population of over 25,000 inhabitants. Bushey Heath is a large neighbourhood south east of Bushey on the boundary with the London Borough of Harrow reaching elevations of 165 metres above sea level.
The first written record of Bushey is an account in the Domesday Book, which describes a small agricultural village named 'Bissei' e' and then 'Bisheye' during the 12th century). However, chance archaeological findings of Stone Age tools provide evidence that the area was inhabited as far back as the Palaeolithic period. The town also has links to the Roman occupation of Britain, with the main road running through it being Roman; sites of possible Roman villas being unearthed in the area; and a Roman tessellated pavement was discovered near Chiltern Avenue.