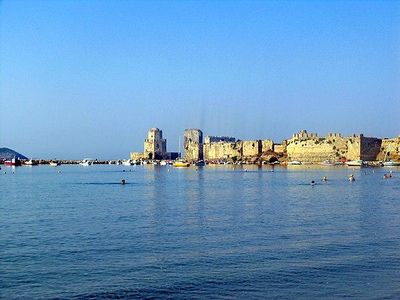 Methoni is a village and a former municipality in Messenia, Peloponnese, Greece. Since the 2011 local government reform it is part of the municipality of Pylos-Nestoras, of which it is a municipal unit. The municipal unit has an area of 97.202 km2. Its name may be derived from Mothona, a mythical rock. It is located 11 km south of Pylos and 11 km west of Foinikounta. The municipal unit of Methoni includes the nearby villages of Grizokampos, Finikouda, Foiniki, Lachanada, Varakes, Kainourgio Chorio, Kamaria, Evangelismos and the Oinnoussai Islands. The islands are Sapientza, Schiza and Santa Marina; they form a natural protection for Methoni harbour. The town is also known by the Italian name Modone, which it was called by the Venetians.

Methoni has been identified as the city of Pedasus, which Homer mentions under the name "ampeloessa" , as the last of the seven εὐναιόμενα πτολίεθρα that Agamemnon offers Achilles in order to subdue his rage. Pausanias knew the city as Mothone, named either after the daughter of Oeneus or after the rock Mothon, which protects the harbour, and mentioned a temple to Athena Anemotis there. The Oinoussai complex of islands protected the port of Methoni from the turbulent sea. Along with the rest of Messenia, the town gained its independence from the Spartans in 369 BC.