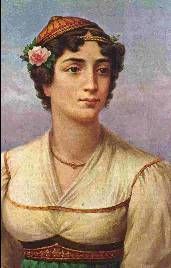 The heroin Manto Mavrogenous lived here in Paros. Born in Trieste, (her father was from Mykonos), she moved to Paros with her family, in 1809 where she learned from her father that the Filiki Eteria was preparing for the Greek revolution.

She financed and fought in the war for independence.

Mavrogenous moved back to Paros in 1840, where some of her relatives resided, and lived on the island where her home still stands as a historical monument, located close to the Panagia Ekatontapyliani (the Church of the Virgin Mary) which, tradition says, was founded by Saint Helena, mother of Constantine the Great. She died on Paros in July 1848, in oblivion and poverty, having spent all her fortune for the War of Independence.