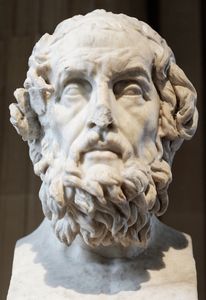 There is a geological these stating that this part of the island was once a part of the sea, seperating the western peninsula from the rest of the Island.

This geological channel is called Strabo's channel. This channel was still existing in the Bronze age. Seismic survey and boreholes support this hypothesis.

As a result, the western part of the island could have been a seperate island, as described by Homer, called Homer's Ithaca, the home of Odysseus.