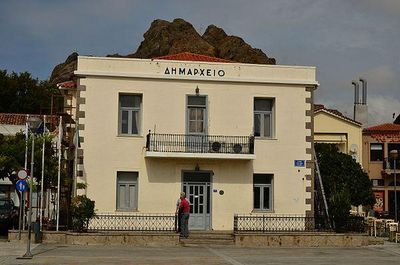 Myrina is a former municipality on the island of Lemnos, North Aegean, Greece. Since the 2011 local government reform it is part of the municipality Lemnos, of which it is a municipal unit. It covers the west coast of the island, and has a land area of 82.049 square kilometres , about 17.2% of the island's area. Its municipal seat was the town of Mýrina , located in the middle of the island's west coast. The town is also the capital of Lemnos, as well as the seat of the Metropolitan of Lemnos. In addition to the town of Myrina, the municipal unit includes the communities of Káspakas , Platý , Thános , and Kornós . The 2011 census recorded 5,711 residents in the town and 8,006 residents in the municipal unit.
The municipal unit's economically active population in 2001 was 3,007. Of them, 14.5% were employers, 12% self-employed, 65.4% wage-earners, 4.1% unpaid, auxiliary family members, and 4% did not declare line of occupation. Of the economically active population, 6.7% worked in agriculture, 4% in light manufacturing, 12.3% in construction, 8.5% in hotels & restaurants, and the rest in other lines of business .