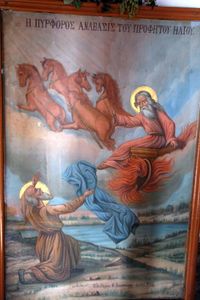 Profitis Ilias refers to Elijah or Elias, a prophet and a wonder-worker who operated in the northern kingdom of Israel during the 9th century BC, according to the Books of Kings in the Hebrew Bible. According to the Books of Kings, Elijah defended the worship of Yahweh over that of the Canaanite idol Baal. Yahweh also performed many miracles through Elijah, including raising the dead, bringing fire down from the sky, and taking the prophet up to heaven "by a whirlwind". Elijah appears with Moses during the Transfiguration of Jesus. Elijah is also a figure in various Christian folk traditions, often identified with earlier pagan thunder or sky gods.