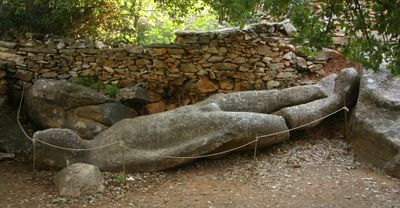 This place is known for the 5.5 meters high and about 5 to 7-ton Kouros of Flerio. Both legs of the unfinished image were broken off. Another, second Kouros of Flerio lies in the area of Potamia, 300 m southwest of an old quarry. The 9 meter long colossus of the Naxi was also found in this quarry, transported to Naxos and shipped to the island of Delos. The quarries in Melanes were only used from the 7th to the 6th century BC. Not far from the village of Melanes near Kinidaros are the quarries of the marble of Naxos.