Tower of the Winds

RouteYou » Wikipedia » Places of interest » Tower of the Winds 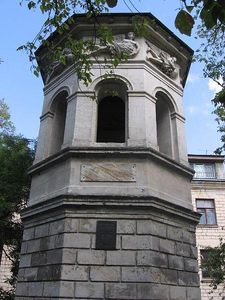 The Tower of the Winds or the Horologion of Andronikos Kyrrhestes is an octagonal Pentelic marble clocktower in the Roman Agora in Athens that functioned as a horologion or "timepiece". It is considered the world's first meteorological station. Unofficially, the monument is also called Aerides , which means Winds. The structure features a combination of sundials, a water clock, and a wind vane. It was supposedly built by Andronicus of Cyrrhus around 50 BC, but according to other sources, might have been constructed in the 2nd century BC before the rest of the forum. In summer of 2014, the Athens Ephorate of Antiquities began cleaning and conserving the structure; restoration work was completed in August 2016.
The 12-metre-tall structure has a diameter of about 8 metres and was topped in antiquity by a weathervane-like Triton that indicated the wind direction. Below the frieze depicting the eight wind deities—Boreas , Kaikias , Apeliotes , Eurus , Notus , Lips , Zephyrus , and Skiron —there are eight sundials. In its interior, there was a water clock , driven by water coming down from the Acropolis. Recent research has shown that the considerable height of the tower was motivated by the intention to place the sundials and the wind-vane at a visible height on the Agora, effectively making it an early example of a clocktower. According to the testimony of Vitruvius and Varro, Andronicus of Cyrrhus designed the structure. The tower's columns bore capitals of a design now known as "Tower of the Winds Corinthian", although they lack the volutes ordinarily found in Corinthian capitals.