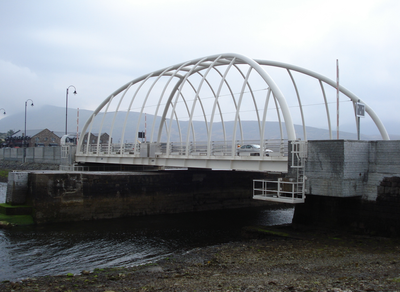 The Michael Davitt Bridge is a swing bridge that crosses from the Corraun Peninsula to Achill Island. It is named for Michael Davitt, 19th Century Irish social campaigner, Fenian, and founder of the National Land League, who officially opened it in 1887. In 1947, the old bridge, too small to adequately convey vehicular traffic, was abandoned and a new bridge was built along the south side of the original, also called the Michael Davitt Bridge.