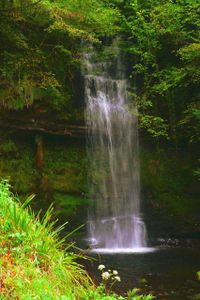 Glencar Waterfall is mentioned in the poem the Stolen Child" by William Butler Yeats. Visit Glencar Waterfall at the magical time of dusk, and imagine the fairies and changelings from The Stolen Child. "The Stolen Child" is a poem by William Butler Yeats, published in 1889 in The Wanderings of Oisin and Other Poems. The poem is based on Irish legend and concerns faeries beguiling a child to come away with them. Yeats had a great interest in Irish mythology about faeries resulting in his publication of Fairy and Folk Tales of the Irish Peasantry in 1888 and Fairy Folk Tales of Ireland in 1892.