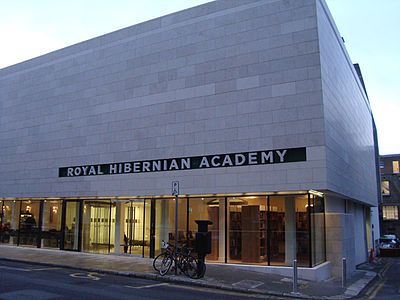 The Royal Hibernian Academy is an artist-based and artist-oriented institution in Ireland, founded in Dublin in 1823.
The RHA was founded as the result of 30 Irish artists petitioning the government for a charter of incorporation. According to the letters patent of 5 August 1823, The Royal Hibernian Academy of Painting, Sculpture, and Architecture was established, which included a National School of Art. The first elected president was the landscape painter, William Ashford. In 1824 architect Francis Johnston was made president. He had provided headquarters for the RHA at Academy House in Lower Abbey Street at his own expense. The first exhibitions took place in May 1825 and were held annually from then on. To encourage interest in the arts works displayed at the RHA were distributed by lot as prizes among subscribers. Works by Frederick William Burton, Daniel Maclise, J. M. W. Turner and David Wilkie, among others, were presented in this way. The exhibitions and school prospered and by the end of the 19th century the RHA was the leading Irish institution involved in promoting visual arts. Academy House was destroyed by fire in 1916 during the Easter Rising.