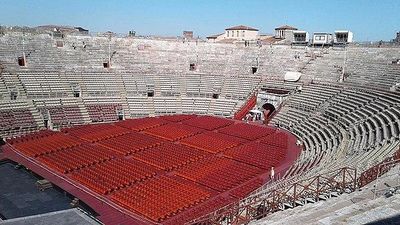 The Verona Arena is a Roman amphitheatre in Piazza Bra in Verona, Italy built in the first century. It is still in use today and is internationally famous for the large-scale opera performances given there. It is one of the best preserved ancient structures of its kind. In ancient times, nearly 30,000 people was the housing capacity of the Arena. Nowadays, for security reasons, the maximum attendance is 15,000 people.

The building itself was built in AD 30 on a site which was then beyond the city walls. The ludi staged there were so famous that spectators came from many other places, often far away, to witness them. The amphitheatre could host more than 30,000 spectators in ancient times.