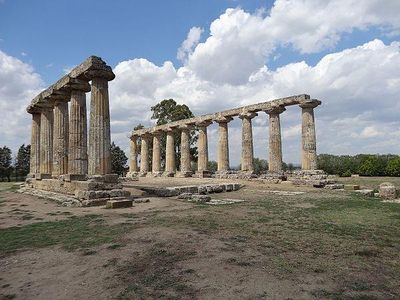 Metapontum or Metapontium was an important city of Magna Graecia, situated on the gulf of Tarentum, between the river Bradanus and the Casuentus . It was distant about 20 km from Heraclea and 40 from Tarentum. The ruins of Metapontum are located in the frazione of Metaponto, in the comune of Bernalda, in the Province of Matera, Basilicata region, Italy.

Though Metapontum was an ancient Greek Achaean colony, various traditions assigned to it a much earlier origin. Strabo ascribes its foundation to a body of Pylians, a part of those who had followed Nestor to Troy. Solinus also mention that it was established by Pylians. While Justin tells us it was founded by Epeius, the hero who constructed the wooden horse at Troy; in proof of which the inhabitants showed, in a temple of Minerva, the tools used by him on that occasion. Another tradition, reported by Ephorus, assigned to it a Phocian origin, and called Daulius, the tyrant of Crisa near Delphi, its founder. Other legends carried back its origin to a still more remote period. Antiochus of Syracuse said that it was originally called Metabus, from a hero of that name, who appears to have been identified with the Metapontus who figured in the Greek mythical story as the husband of Melanippe and father of Aeolus and Boeotus.