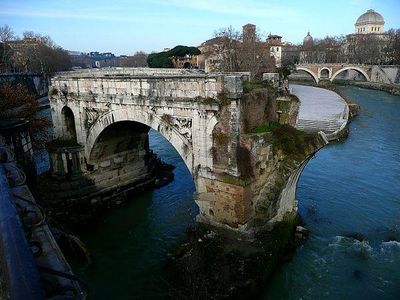 The Pons Aemilius , today called Ponte Rotto, is the oldest Roman stone bridge in Rome, Italy. Preceded by a wooden version, it was rebuilt in stone in the 2nd century BC. It once spanned the Tiber, connecting the Forum Boarium with Trastevere; a single arch in mid-river is all that remains today, lending the bridge its name Ponte Rotto .

The oldest piers of the bridge were probably laid when the Via Aurelia was constructed in the mid-2nd century BC. According to Titus Livius, there existed a bridge in the same location as the Pons Aemilius in 192 BC. The first stone bridge was constructed by Censor Marcus Fulvius Nobilior several years after that, in 179 BC . The bridge's piers date from this early period, although its arches were constructed in 142 BC. The bridge kept its place for several hundred years, although it was repaired and rebuilt both by Augustus, and later by Emperor Probus in AD 280.