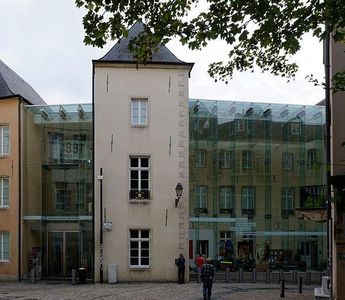 The Luxembourg City History Museum, French: Musée d'histoire de la Ville de Luxembourg, illustrates the thousand-year history of the City of Luxembourg with both permanent and temporary exhibits. Founded on 22 June 1996, it was designed by Luxembourg architect Conny Lentz and Repérages, Paris.
Like the city itself, the museum successfully combines ancient architecture with modern extensions. It is housed in four restored houses from the 17th to the 19th century which still bear archeological traces from the Middle Ages. Examples of how to combine old buildings with the expectations of museum visitors are the floating glass façade and the panoramic lift which offers extensive views of all floors. The huge glass cage of the lift gives up to 65 people views of the rock foundations on the lower levels as well as views of the city's Grund district and Rham plateau on the upper levels, revealing the stages of Luxembourg's history over the centuries. Also of interest are the ancient, vaulted cellars which were discovered during excavation work in the early 1990s.