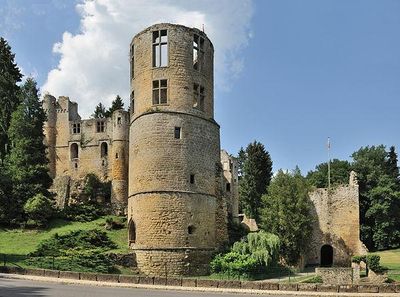 Beaufort Castle dating from the 11th century consists of the ruins of the medieval fortress and an adjacent Renaissance château. It is located in Beaufort in eastern Luxembourg.
It was probably in the 11th century that the castle began as a small square-shaped fortress on a large rock protected by a moat and a second wall above the valley. A reference from 1192 indicates that Wauthtier de Wiltz et Beaufort was its first lord. During the first half of the 12th century, a keep was added and the gate was moved and enlarged. In 1348, the property came into the hands of the House of Orley after Adelaide of Beaufort married William of Orley. The Lords of Orley made significant extensions overlooking the valley. In 1477, Maximilian of Austria transferred the castle to Johann Bayer von Boppard after Johann von Orley-Beaufort committed a breach in trust. In 1539, Bernard von Velbrück became Lord of Beaufort through marriage and added the large Renaissance wing with cross-framed windows on top of the medieval walls.