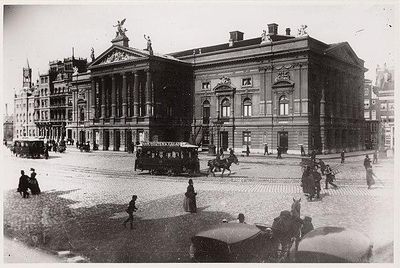 The Stadsschouwburg of Amsterdam is the name of a theatre building at the Leidseplein in Amsterdam, Netherlands. The building is in the neo-Renaissance style dating back to 1894, and is the former home of the National Ballet and Opera.
The first 'rederijkers' appeared at the end of the 15th century in Amsterdam. In the 16th century, these so-called precursors of modern theatre organized themselves into 'rederijkerskamers', which can be compared to theater companies. At that time, there were no permanent theater buildings in Amsterdam, and the shipping company cherries performed on temporary stages, from carts or in public spaces. Rederijkerskamers that performed in Amsterdam were: "In Liefde Bloeyende" and "'t Wit Lavendel". The latter was also known as the "Brabantsche Kamer", since its members mainly hailed from Brabant and the Flemish areas.