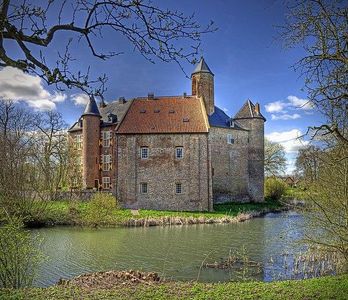 Waardenburg Castle, sometimes also called Weerdenburg, is a medieval castle located in Waardenburg in the municipality of West Betuwe, in the Dutch province of Gelderland.The date of foundation of Waardenburg Castle is precisely known: on August 5, 1265, Count Otto II of Gelre gave the villages Hiern, Neerijnen, and Opijnen to Rudolph de Cock, knight, who gave his possessions in Rhenoy in return. When this Rudolph had received the village of Hiern on loan, he wanted to settle there too. So he asked the liege lord for permission to build a house. Count Otto gave permission for this, but the building could not cost more than 300 Leuvense pounds.